New Delhi: In a tragic accident, two people were killed on Tuesday (September 14) night after a speeding car hit the bike they were travelling in on the Electronic City flyover in Bengaluru.

The Karnataka police informed that the duo, a woman and a man, on the bike were hit by a speeding car and thrown off the Electronics City flyover. “Both man and the woman died on the spot due to the severe injuries. Meanwhile, the driver of the car who has been identified as Nitesh, is also injured and admitted to a private hospital,” ANI quoted the police as saying.

The police further said that a case has been registered in Electronic city police station under section 279 and 304 (A).

Preetam Kumar (30), a quality control manager, from Bengaluru and 28-year-old Kritika Raman who hailed from Tamil Nadu, a team leader, died on the spot after the speeding car hit their bike.

The incident which was caught on CCTV, showed the victims pushing their two-wheeler towards the parking bay a few moments before the accident. As per the police, they had to push the vehicle as the petrol tank had become empty, IANS reported.

The police also suspect that the car driver may have consumed drugs. The driver of the car is currently admitted to a hospital. 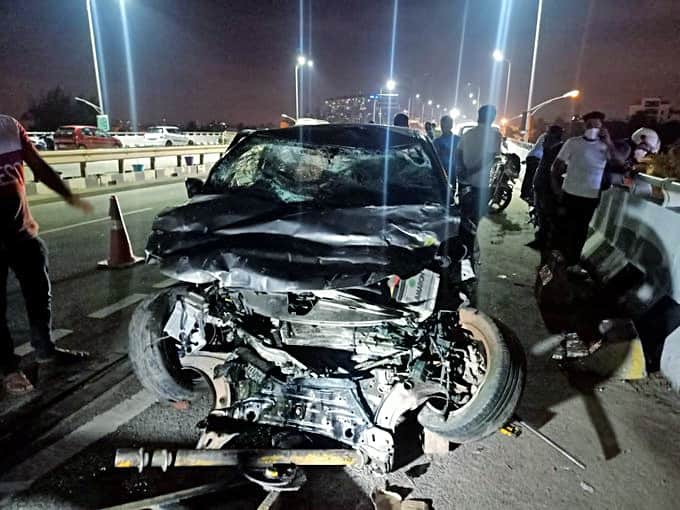 The car after it hit the bike on an elevated flyover in Bengaluru on Wednesday (Pic Courtesy: ANI)

Additional Traffic Commissioner Dr Ravikanthe Gowda on Wednesday stated that the blood samples of the driver Nitesh P (22), an engineering student, have been sent for medical tests to find out whether he was under the influence of drugs or alcohol while driving. “Presently he is being treated at a private hospital as he suffered serious injuries on his ribs. The preliminary investigation suggests that rash and negligent driving of the car driver is the reason for the accident. The car was going at 100 kmph when it hit the victims,” he was quoted as saying by IANS.