Big Boy Toyz has fired Miglani with immediate effect and the company has also denied any knowledge of the alleged racket. The statement read, “Mr. Nipun Miglani is terminated with immediate effect & BIG BOY TOYZ, does not hold any liability and responsibility towards his alleged individual transactions. It is made known to the general public at large that whatever Mr.Nipun Miglani has done in his individual capacity, Big Boy Toyz Ltd. is not liable for the same and furhter also if any person deals with Mr. Nipun Miglani, he rnay do at his own risk and Big Boy Toyz ltd. has no concern with him. We also inform the public at large that any concern or query in the alleged matter, may not write to Big Boy Toyz as in no way Big Boy Toyz is involved in this.”

Have a look at the statement issued by Big Boy Toyz: 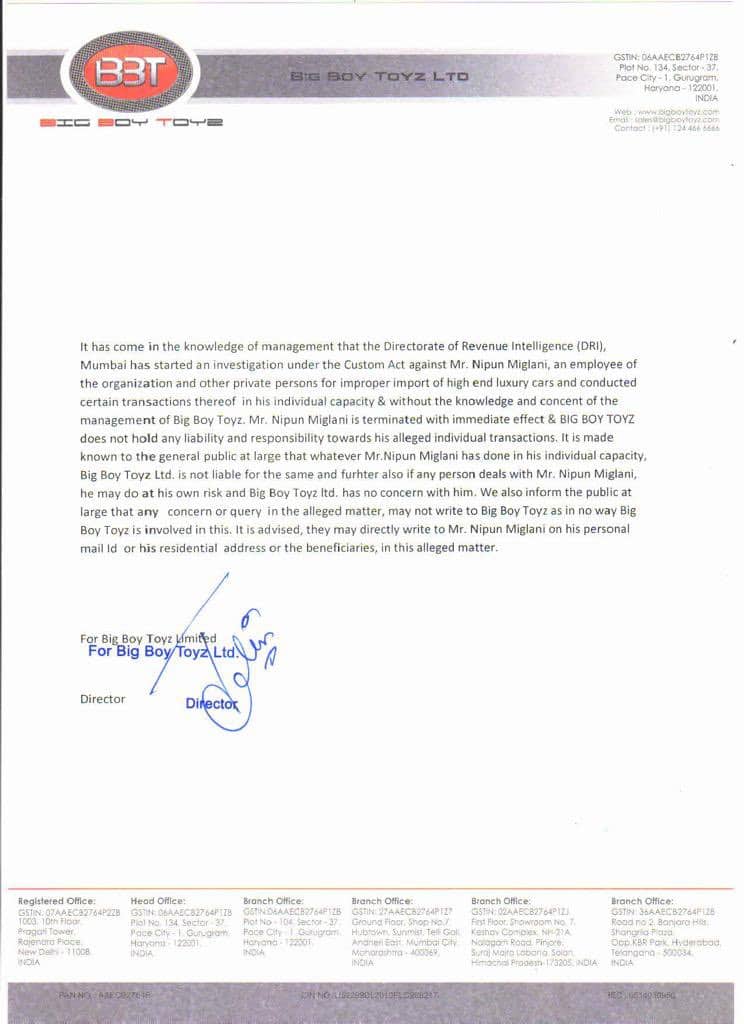 DRI is also investigating the role of the management in the scam. Many feel that without their knowledge, it’s difficult for CEO Miglani to do this.

DRI launched ‘Operation Monte Carlo‘ after it received a tip-off that a group of individuals was involved in smuggling high-end luxury cars into India in the name of diplomats and diverting the same to private persons, thereby evading a huge amount of Customs duty.

Upon receiving specific details of one such luxury car imported in the name of a Delhi-based diplomat of an African nation, DRI officers kept discreet watch over the vehicle after its arrival at the port. Thereafter, this vehicle was loaded onto a transport vehicle and taken to a showroom in Andheri and placed for display. DRI officers followed the vehicle and kept discreet watch over the car all along. Parallelly, in a carefully-planned all-India operation across seven cities, searches were carried out at the premises of the key individuals involved in this racket. A total of six cars have been detained under the provisions of the Customs Act, 1962. More cars have been identified and are in the process of being located.

The modus operandi followed by the accused – a Dubai-based individual, who has been involved in past Customs offences and has been investigated by DRI, was the mastermind behind the racket. He would arrange for import of luxury cars into India from countries like UK, Japan and UAE, in the names of diplomats. The actual buyers for the vehicles would be identified by the CEO of a popular chain dealing in sale of pre-owned luxury cars.

It is estimated that more than 20 luxury vehicles have been smuggled into India in the name of diplomats over the past 5 years, resulting in duty evasion of more than Rs 25 crore.

For the unversed, imports made by foreign diplomats and Missions in India are governed by the Foreign Privileged Persons (Regulation of Customs Privileges) Rules, 1957. Motor cars are classifiable under chapter heading 8703 having duty structure of BCD – 125%, IGST – 28% and 12.50% SWS. The net Customs duty on import of cars works out to 204%. Notification No. 03/57 dated 08.01.1957 issued by the Government of India (as amended from time to time) grants exemption from Customs duty to certain classes of members of Diplomatic Missions in India and their family members on all imported goods.